Highclere Castle, the setting of the international hit series, “Downton Abbey,” is also the home to WWSG exclusive speaker, Lady Fiona Carnarvon. Lady Carnarvon and the Worldwide Speakers Group’s partnership began when Lady Carnarvon traveled to the United States for the first time, a trip that would begin her many adventures with Patsy Arnett. 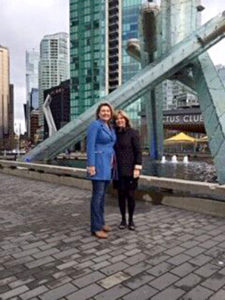 Patsy, now an Agent at WWSG, has traveled with Lady Carnarvon to New Orleans, Houston, Nashville, Richmond, New York City and many more cities where Lady Carnarvon has shared the stories and heritage of the wonderful building and estate where she lives, and all the people and animals that live and work there.

Time seems to have flown by since I wrote my first book ‘Lady Almina and the Real Downton Abbey’ in 2010. As a new author I had absolutely no idea that I would be expected to give talks to help promote it and that came as quite a shock. It was later published in several other countries and inevitably I began to give talks abroad as well. Given the mass of entertainment platforms available these days, authors’ talks are now ever more a priority in order to share their endeavours.

Patsy Arnett lives in Richmond, Virginia and, as President of Arnett & Associates Speakers Bureau, contacted me to do a talk in the United States. I took my first flight and, never having visited before, utterly failed to realize how large the USA is and how long internal flights can be. Lesson learned, I now pull out a very large Times Atlas of the world on to the floor to see where I am going, slightly to my son’s horror who does apps not maps.

Patsy later merged her bureau with Worldwide Speakers Group out of Washington, D.C. and I went with her. Over the last few years Patsy and I have had many adventures together in the USA and have become firm friends. ‘Lady Almina’ was followed by ‘Lady Catherine and the Real Downton Abbey’ which again looked not just at the history of Highclere but also at the real characters who lived here in the 1920s: at their loves, lives and challenges. I was even able to share the appropriate royal signatures from our Guest Book, given that this is the time period when the Downton Abbey TV series ends and the film begins, although my book ‘Lady Catherine’ carried on through the 1930s and into the Second World War. 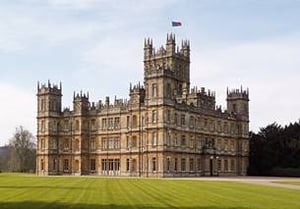 Patsy and I continued on our travels, taking with us presents and auction prizes. One memorable talk was in Nashville which I had thought was for 650 visitors but expanded to well over 2,000. Luckily for my nerves I didn’t realise that until after I got there.

We have now become better organised, sending ahead by courier the gifts we have for the kind sponsors and organisers. Patsy, who is always annoyingly better organised than I am, then starts labelling the gifts with ribbons and name tags which she has brought with her, chatting away whilst I am still unpacking and ironing in my hotel room.

Each engagement aims to raise money for a charity or endeavour chosen by the organisers who invite me. The events take place through the generosity of sponsors -perhaps a tea, a dinner, a talk in a theatre or a gala evening, sometimes all of them. There is often a reception to say thank you to supporters. It is marvellous that so many love Downton Abbey and it is that which acts as the starting point to draw people in to enjoying talks about living in a Castle, about history or architecture or gardens or even to discussing marketing and authenticity. It is a way of creating a fun event, of involving people and, I hope, always leaving a waiting list for tickets and much money raised.

Sometimes the purpose is to raise funds to support education or mental health, sometimes a charity such as the Red Cross. Patsy and I have often supported PBS, a platform which dovetails well with the love of Downton and heritage. 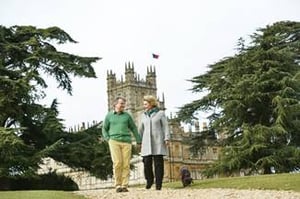 One sort of charity which I would dearly love to support is one which raises money to help look after families left behind, grieving and lost, because of death through war, of which I understand there are some 80,000 in the United States alone. I have been so lucky not to have experienced such a loss but I remember clearly the dreadful pain my sisters and I felt when my parents both died very young of cancer, one after another. We muddled and cried our way through it but it is still a sudden and never expected loss in a relentlessly on-going world.

Patsy always prefers that I speak without notes. I cannot quite remember why but I think it does work best for me. Anyway I would probably have lost the notes… just like I lose my car keys and phones. Without doubt, I am the odd one on the WWSG list, which has many far more important and economically focused speakers than me.

It is an honour that they include me but also true that, beyond the big economic and political matters, are the communities and people that make up daily life. Like so many US companies, Geordie and I are essentially a “Mom and Pop” business, though perhaps the Castle has been around a few hundred years longer than most. The most important part of what we do here, is to support and encourage the people who work with us every day. Unique, sometimes quirky and always committed, it is their happiness which then leads to good business. So many of articles these days are about the work/life/health and conservation balance and this is never more so than at Highclere. It is about our Challenge 2050, our stewardship, of how we live over the next 30 years.

This blog was originally published on Lady Carnarvon’s personal website and has been republished with permission from the author. Click here to view the original article.