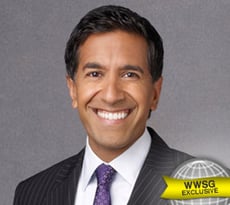 What You Need to Know about Sanjay Gupta...

With his hand on the pulse of the U.S. healthcare system, millions of Americans and people worldwide rely on Sanjay Gupta, CNN’s Chief Medical Correspondent and a practicing neurosurgeon, for breaking medical news and to provide answers to top health questions.

Sanjay Gupta is the source for lucid analysis and astute insight on major developments in medicine, personal health and healthcare, drawing upon his medical training and public health policy experience.

From a medical perspective, he has covered some of the world’s most historic and significant events: the attacks of 9/11, Hurricanes Sandy and Katrina, the 2004 tsunami in Southeast Asia, the 2010 devastating earthquake in Haiti, and Japan in 2011 following the earthquake and tsunami.  His unique and invaluable perspectives are just one of the many reasons audiences are consistently wowed by him.

If you have an interest in finding out more about Sanjay Gupta or other similar keynote speakers for your next event, simply contact us.