5 Tips to Smoothing Over Mistakes for Events & Speaking Engagements

How to Handle Mistakes & Mix-Ups the Right Way 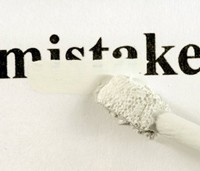 Something is always bound to go wrong at an event or a speaking engagement:  no matter how much double-checking and following up is done, or even how much attention is paid to the details.  Mistakes come in all sizes, and may be as small as leaving a plus-one off the RSVP list, or as huge as sending a keynote speaker to the wrong venue.

Regardless of the magnitude, there is a systematic way for handling mistakes and mix-ups that will help diffuse the situation and not exacerbate it.

The following tips will help ensure that your relationships and reputation are kept intact through any hiccup.

These tips should serve as a roadmap of how to handle not only the problem, but also yourself while projecting a positive, professional attitude.  My final piece of advice is that you learn to accept that there is no such thing as a perfect event.  More importantly, it is how you handle an event's imperfections that will absolutely reflect on you as an event planner—for better or worse!