Tevi Troy is a Worldwide Speakers Group speaker and thought leader on major health issues; he is the Former Deputy Secretary of Health and Human Services. 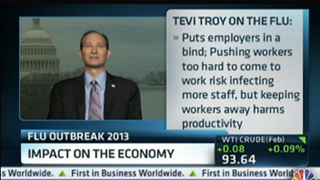 This year's flu season has led to illness, absenteeism, hospitalizations and, tragically, death. It has also led to speculation, misinformation and just plain falsehoods about the illness and the government’s pandemic policies. As a Former HHS Deputy Secretary, Tevi Troy dispels all myth about the flu.

1. This season, the flu is deadlier than ever

That said, the Centers for Disease Control and Prevention (CDC) do not know exactly how many people die from seasonal flu each year. States do not have to report flu deaths among adults, and the cause of death for people with complications or secondary infections from the flu is not always clear. We will not know the estimated number of flu deaths this year for some time.

What we do know is that the flu has peaked quickly this year. The CDC found 22,048 cases of flu in the last three months of 2012, compared with 849 flu cases in the same period in 2011. We also know that 20 children have already died from this flu; 34 died during the 2011-2012 flu season, while 282 children died during the swine flu/H1N1 outbreak of 2009-2010. These figures suggest that this flu season will be worse than last year’s but not as bad as the one three years ago.

When producing vaccines each season, there’s no easy way for drug companies to know that they’ve made enough. Manufacturers made about 135 million doses of vaccine this season, of which 128 million have been distributed. Flu vaccine takes about nine months to make, which means that manufacturers have to start developing a vaccine well before flu season begins. Even though there have been some isolated shortages, particularly in the Northeast, drugmakers cannot easily adjust the number of doses once production is underway.

Manufacturers are more nimble than they once were and have reduced the time it takes to make an annual batch. Technological improvements, such as cell-based vaccines, could make the production cycle even shorter. (Cell-based vaccines are grown in cell cultures, unlike most flu vaccines, which are made inside fertilized chicken eggs, a slower technique that dates to the 1930s.) In fact, last November, the Food and Drug Administration approved the first cell-based seasonal flu vaccine in the United States.

Though for now we are largely stuck with the number of vaccine doses we already have, manufacturers base production targets on how many shots were used in previous years. Therefore, the best way to make sure we have more vaccine next year is to go out there andget that flu shot.

3. The vaccine won’t keep you from getting the flu — and it’s unsafe, anyway.

The flu vaccine is about 62 percent effective in preventing the flu — obviously not perfect. Still, vaccines are matched to this year’s flu strains, particularly the virulent H3N2 causing the worst problems, and are the best way to prevent infection should you be exposed.

Vaccines are also safe. Anti-vaccine advocates such as HBO talk-show host Bill Maher — who said on Twitter in 2009 that people who got swine-flu shots were “idiots” — have falsely suggested that the flu shot puts a live virus in your arm. Such rumors contribute to an unfortunate phenomenon: “vaccine hesitancy.” Respiratory-disease expert Frank Esper of UH Case Medical Center in Ohio told FoxNews.com that flu shots have “absolutely no live virus. . . . You cannot get the flu from the shot because it doesn’t contain all the parts of the flu virus.” The CDC Web site confirms this.

Still, vaccine hesitancy gives people an excuse not to get a shot or to get one too late, as it takes about two weeks to develop immunity after vaccination. Vaccine naysayers, beware: You are missing out on your best possible protection.

4. People should stay away from enclosed spaces during flu season.

During the swine flu outbreak in 2009, Vice President Biden said on NBC’S “Today” show that he “wouldn’t go anywhere in confined places now.” The statement caused an uproar and threatened to drive people away from air travel and public transportation. Then-White House press secretary Robert Gibbs had to apologize for Biden’s remarks, which show how careful government officials must be in making public pronouncements. Not causing panic is more important than Purell in any flu-response plan.

While I wouldn’t recommended jumping into a pit filled with flu patients, simple prevention goes a long way. The best way to fight the virus is to apply lessons learned in kindergarten: Wash your hands often and well (sing “Happy Birthday” twice to make sure you’ve scrubbed long enough); cough into your sleeve and not into other people’s food or faces (and wash that shirt afterward); and stay home if you are feeling sick or running a fever.

5. The government is doing all it can to fight the flu.

In 2005, the George W. Bush administration launched a $7 billion effortto prepare for pandemic influenza. It was inspired in part by concerns about avian flu and the SARS outbreak of 2002, but also by John M. Barry’s “The Great Influenza,”which Bush had read during a summer vacation. The plan centered on improvements in vaccine technology, countermeasures such as antivirals, domestic preparedness and international cooperation.

As a result of this effort, the government had a flu plan in place when the 2009 H1N1 outbreak occurred. As the New York Times noted, the Obama team’s response to H1N1 was built “on concrete preparations made during the tenure of President George W. Bush that have won praise from public health experts.”

While we are better off today than we were a decade ago on this front, concerns over the recent outbreak show the need to develop more flexible platforms for manufacturing flu vaccines, as well as to educate Americans about the importance of getting a dose before flu season hits and staying home when sick. The government should also improve distribution of antivirals and accelerate the development of home medical kits that people can use when instructed by public health officials. Perhaps then, we’ll be as ready as we can be for another great epidemic.