Why Is Our Political System So Dysfunctional? Speaker Matt Bai Answers

Scandal after scandal. Confused and ineffective political parties.  Budget resolutions that don't resolve anything.  Our political system is plagued with dysfunction.

Has this always been the case?  Why has our political landscape changed so drastically in such little time to produce an unsuccessful government?  What does this mean for the future of the United States and our economy?

No matter what industry you represent, the decisions made in Washington will have a direct impact on your organization, your family and ultimately your way of life. 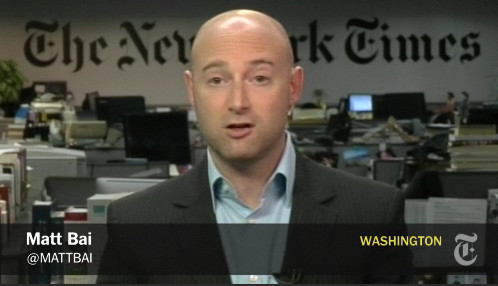 In this new series of podcasts, Matt Bai, Chief Political Correspondent to the New York Times Magazine, reveals the reality of American Politics and the forces causing dysfunction.

Political speaker Matt Bai shares his insights based on more than a decade of reporting and analyzing politics. He breaks down some of the dense issues congesting our system in this three-week series:

This week’s segment looks at the 2016 Presidential bid and the fate of the Republican Party based on poor performance in the 2012 elections. In Part I, Matt Bai responds to the questions: Looking back at the 2012 elections, how did the Republican Party miss the mark so badly?; How will the party rebuild?; and, How will Democrats react to these changes? He suggests that Republicans found themselves on the wrong side of a generational divide and that they will need to elect a younger candidate in the next election to appeal to younger voters. (Transcript available here).

In Part II, he responds to the questions: What will the 2016 elections look like?; and, How will they differ from 2012?  Matt Bai dives into the question with a small caveat that “anyone who tells you they know what the 2016 election will look like... just likes to hear themselves talk.”  He speculates how the Republican Party will rebrand itself and questions whether Democrats can maintain control of the White House for a third term after 2014 mid-term elections. (Transcript available here).

On June 27th, WWSG will release the second segment of the Matt Bai podcast series. In this portion, Matt Bai will explore political gridlock and the leadership deficit in Congress by answering the questions: What is the political oulook for the next four years; Can the gridlock dissolve, or will it only get worse?; and Is America getting the leaders it deserves?

Post-Boomer Politics in the Age of Transparency

In the final segment, Matt Bai looks at post-boomer politics by exploring generational divides and the impact of social media and younger generations on national elections. It will be available on July 11th. For exclusive access to these videos and reminders of new releases, follow Worldwide Speakers Group on LinkedIn, Twitter and Facebook.

As the chief political correspondent for the New York Times Magazine, Matt Bai has his finger on the pulse of contemporary American politics. He covered the 2004, 2008 and 2012 presidential elections, and is a respected thought leader on generational change in American political society.