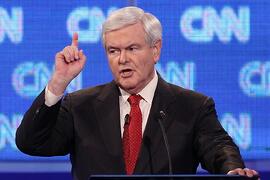 Although most know of Newt Gingrich as former Speaker of the House and a 2012 presidential candidate, he is more than a political vanguard: he is one of the foremost thinkers on economic, healthcare, social, and business & leadership issues in America today.

As an author, he has published 23 books including 13 New York Times best-sellers. He has also become one of the most highly sought-after public speakers, accepting invitations to speak before many of the most prestigious organizations in the world.

Because of his unquenchable thirst for knowledge, Speaker Gingrich is able to share unique and unparalleled insights on a wide range of topics with audiences, who find him to be not only educational but also an inspirational speaker.

As always, please let us know how we can help bring Newt Gingrich or any of our other distinguished speakers to your upcoming event: 703.373.WWSG (9974).

Get important updates and exclusive features by following WWSG: